New York City immigration attorney Keetick L. Sanchez releases a new article (https://accidentlawyer-queens.com/immigration-lawyer/) discussing the finer points of US federal immigration laws. The attorney explains that current immigration laws in the United States are in a constant state of change and can become complicated for the average person. The lawyer mentions that living in the US can be risky for individuals who are not aware of what their rights and responsibilities are under the law. 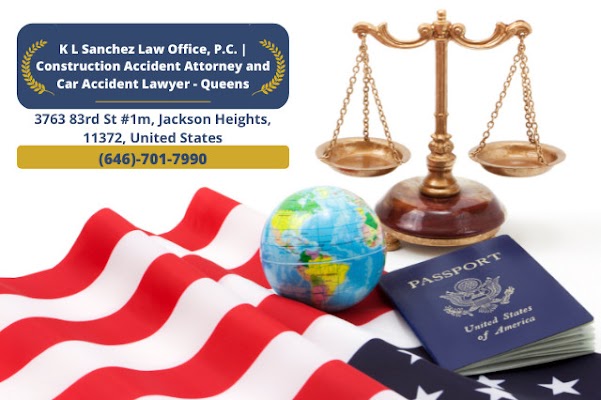 In the article, attorney Sanchez emphasizes that a foreign citizen who wishes to lawfully reside in the United States must have an immigrant visa. To avoid deportation, strict compliance with immigration law is necessary.

The attorney enumerates different options to immigrate under US law that individuals can explore. One of those options is family immigration; where an individual can sponsor a relative to immigrate to the United States. A sponsor can petition for an immediate relative visa or a family preference visa. Attorney Sanchez clarifies that the sponsor’s US residency status will determine which of the two kinds of family immigration visas they can use.

Another immigration option attorney Sanchez discusses is the Permanent Resident Card – more commonly known as the Green Card. A green card allows an individual to live and work in the United States permanently. Attorney Sanchez relates that getting a green card is the common first step for people seeking citizenship. US citizens may apply for a permanent resident card on behalf of their immediate family members as long as the entry to the country was done lawfully.

“As a U.S. citizen, you may also wish to sponsor an adult child or sibling. These family members will be subject to a waitlist since there are only a limited number of these petitions available each year,” the immigration lawyer explains.

Lastly, attorney Sanchez emphasizes that navigating complex immigration laws can be difficult for the average person. She relates the importance of seeking the advice of an experienced immigration lawyer when determining which option is appropriate.

Attorney Keetick L. Sanchez works closely with clients to provide skilled and informed legal representation in matters related to personal injury law, criminal law, and immigration. The lawyers at K.L. Sanchez Law Office believe that a victim deserves to be compensated for the injuries they suffered. To speak with an accident lawyer, call (646) 701-7990 today.

A Fashion Fairytale: How One Woman Went From Songwriting To Running A Million-Dollar Business

Avro Advisory sheds light on Web3 for a brighter tomorrow

Stuck in a better-than-nothing relationship? Dating coach Demi Paterson has released a new book to guide you

Struggling to find a soulmate? Demi Paterson, a relationship expert and author, has written a new book to help you find 'The One'

Author and dating expert Demi Paterson's new self-help book, 'The One,' offers advice on how to find and select the ideal partner

Resources Available For Finding A Bipolar Rehab in Arizona