New York City divorce lawyer Ryan Besinque releases a new article (https://www.besinquelaw.com/do-you-have-to-be-separated-for-a-year-to-get-a-divorce-in-ny/) explaining the ease and relative speed of no-fault divorce. The lawyer mentions that the divorce process in New York has historically been a lengthy and costly procedure. One spouse needs to allege that the other was at fault for the divorce under specific grounds. The only other options besides fault-based grounds were to separate for a period of a year under a separation agreement or judgment.

“In the state of New York, we traditionally had six different grounds for divorce. Depending on which grounds the spouses alleged, it determined the requirements for the divorce. Traditional fault-based grounds include cruel and inhuman treatment, abandonment of a spouse for a period of one year, adultery, and have not lived together for at least one year,” says the New York City divorce lawyer. 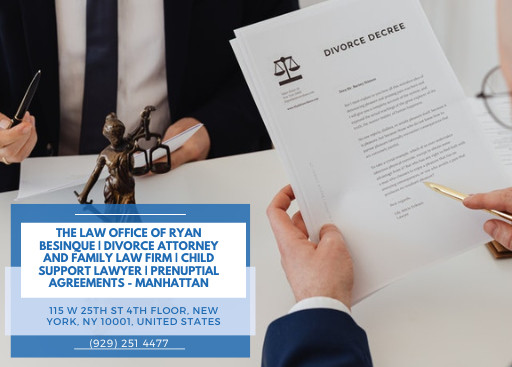 The lawyer explains that in a fault-based divorce, one spouse had to blame the other for the breakdown of the marriage and prove it. Litigation and fault-finding usually made the divorce more acrimonious, time-consuming, and expensive.

Attorney Ryan Besinque says that in October of 2010, New York finally enacted the no-fault divorce ground. This allowed married couples to seek a divorce if one spouse alleges that the marriage is irretrievably broken for a period of at least six months.

According to the divorce attorney, “If one spouse seeks a divorce alleging the marriage has been irretrievably broken for at least six months, there is no need for defense by the other partner. A divorce will be granted as long as all the other issues are resolved, such as child support, child custody, marital asset distribution, and spousal support. Consequently, in this case, the couple is not required to be separated for a year as required by some of the other fault-based grounds for divorce.”

Lastly, attorney Besinque emphasizes that it's very important to seek the help of an experienced divorce attorney in matters related to divorce. Having a skilled attorney may be able to help when it comes to creating agreements related to custody and help them when it comes to understanding their rights and responsibilities.

About The Law Office of Ryan Besinque

Ryan Besinque, Esq. is an experienced New York City child support attorney. He has witnessed firsthand the financial and emotional toll divorce and separation can take on families during his years of practice. He tailors his approach to ensure that each client is fully represented and feels optimistic about the future. Contact them today at (929) 251-4477 to schedule an appointment.

For more information about The Law Office of Ryan Besinque | Divorce Attorney and Family Law Firm, contact the company here:

MortgageRight, Claims Not Making Enough Is Why Net Branches Fail If They Don’t Move

Kennected Reports on One of Their Case Studies: $1 Million in Revenue for Tidal After Using Their Software

Houston Estate Planning Lawyer Whitney L. Thompson Explains Why Failing to Plan the Future of an Estate Can Be Scary